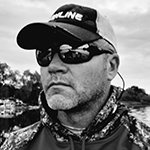 With the recent successful introduction of muskellunge in many Michigan waters, there is increasing interest in the fishery, and along with that, increased angling pressure. What was once considered the fish of “ten thousand casts” isn’t necessarily the case for most fisheries these days. Catching a muskellunge has become much easier, thanks to stocking efforts of the Michigan DNR with assistance from Michigan Muskie Alliance. Also, because catch-and-release is now practiced by the majority of muskie anglers, many "trophy" fish are being caught and released multiple times.

Nets:
Most anglers choose to net their muskies; a quality “muskie-appropriate” net will enable fish to be landed faster while also allowing the fish to stay in the water during de-hooking. A muskie, as with all fish, isn’t able to breathe out of the water; keeping them in the water as much as possible greatly reduces the stress the catch and release process will have on them. A good analogy might be imagining yourself running a quarter-mile, and while you’re gasping for breath, being placed underwater and be unable to breathe! Keeping the muskies head under water as much as possible while de-hooking is key to maximizing their survival.

Beckman, Frabill and Stowmaster all build good “fish friendly” nets capable of handling the largest muskies. These companies have engineered these nets with wide hoops and deep bags that allow the net to act as a holding pen, allowing the fish to remain in the water and not be cramped. This enables the angler to perform de-hooking while the muskie recovers at boatside in the water. Any muskie-appropriate net will have a knotless, coated bag that reduces slime removal and a smaller mesh that nearly eliminates damaged fins.


Tools:
The surgical forceps or 6” needle-nose pliers commonly used to unhook many other species aren’t going to suffice when you have a muskie with a mouth full of 4/0 treble hooks and lots of large, sharp teeth to navigate. Long pliers (11” or more, A) and long hook-out tools are important to keep your hands away from the sharp hooks and teeth. Also, it isn’t uncommon for a hook to become imbedded in a way that makes backing the hook out very difficult, and therefore cutting the hook is the best way to keep you and the fish safe. A pair of mini compound-action bolt cutters are a must-have; side cutters aren’t going to get the job done on a 4x-strong muskie hook. There are many less-expensive models out there, but a high quality pair of small bolt cutters make cutting hooks very easy. Knipex mini compound bolt cutters (B) are widely regarded as the best tool for the job. Many anglers are hesitant to cut hooks from their favorite lure, but keep in mind: hooks are cheap and easy to replace… muskies aren’t. Once hooks are cut removal of the remaining pieces is much easier. Don’t leave hooks in a fish, they will not rust away; the remaining hook pieces can cause infection. Other things you need are a long Baker hook-out tool (C) and mouth spreader (D). The hook pick (E) is a new tool designed to dislodge hooks that are deep inside the mouth of a fish.

Photos:
Many anglers want to have a photo of their catch. Let’s face it: we may spend thousands of dollars in rods, reels, lures and tackle, not to mention travel and boats… A photo of your soon to be released muskie would be nice to have. Once you have unhooked the fish in the net, being careful to keep it in the water, now isn’t the time to put that care aside while you lift the fish for a photo only to find your partner searching for the camera. Have the camera ready before the fish is out of the water; then capturing a couple of photos for posterity shouldn’t take more than 30 seconds. When holding the fish for a photo it is important to support their weight and not hang them vertically. One hand carefully grasping the bone in the gill cover (see photo at left below) and the other hand supporting their body (see photo at right below) will limit stress on their skeletal structure and internal organs.

Releasing:
Once you have unhooked the fish and taken a photo or two, the next step is making sure that fish is ready to swim away. With the fish removed from the net, hold them upright in the water and allow them to tell you when they are ready to swim away. Most fish will just swim out of your hand; some will take a short time to recover and then will swim away. There’s no need to push and pull the fish to “get water through their gills”; this actually makes it more difficult for them to breathe. Just hold them still in the water and they will recover on their own. What about current? Try to always keep the nose of the fish pointed into the current and don’t allow the current to force their gills open. The same applies if the boat is drifting with the wind.
Self interest is for the past, common interest is for the future.
Top
Post Reply
1 post • Page 1 of 1