Great Lakes muskie-rearing program has been decades in the making

The Department of Natural Resources’ conversion from northern muskellunge to Great Lakes muskies for its stocking program is going swimmingly now, but it took a long time to get here. Switching from the northern strain – native to only the westernmost tip of the Upper Peninsula – to the more widespread, native Great Lakes strain has been on the DNR’s wish list for decades. It’s finally happening. 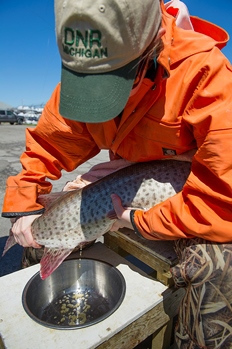 Back in the 1970s and ‘80s, Michigan’s muskie-stocking program centered on tiger muskies, the laboratory offspring of pike and muskies. The program depended on a solar-heating system at Wolf Lake State Fish Hatchery, which provided enough warm water to rear the hybrids. By the 1990s, the solar system was failing and repair costs were deemed too high.

“The (Fisheries) Division made a decision to get out of the tiger muskie business,” explained DNR Fisheries Division Chief Jim Dexter, then a biologist in Plainwell. “We moved into northern muskies, though what we really wanted was Great Lakes muskies. We didn’t have a good source of brood stock. Lake St. Clair wasn’t the musky mecca it is today.”

When the DNR finally located what it thought was a potential source of Great Lakes muskie brood stock – the Indian River system – biologists decided that population wasn’t large enough to support a full-scale rearing program. And a fish disease – piscirickettsia – set the program back as the DNR decided it was too risky to add a possible pathogen to the hatchery system. “That set us back at least five years,” Dexter said.

By the turn of this century, the muskellunge population in the Lake St. Clair system had exploded and it looked like it was a viable brood stock-source. The piscirickettsia problem had been solved. That’s when viral hemorrhagic septicemia (VHS) reared its head.

“Everything was put on hold until the science was able to catch up with the disease,” Dexter said.

Once plans were in place for an isolated rearing facility, the DNR ran into yet another problem: acquiring sufficient brood stock. Initial attempts to net Lake St. Clair muskies did not go well.

The department switched its efforts to the Detroit River, but netting there didn’t go any better.

“In 2009 and 2010, we netted and it just didn’t work out,” explained Todd Somers, the DNR fisheries technician supervisor who oversaw egg take this year at the Detroit River. “So we started electrofishing at night. The first year we electro-fished, we caught 215.”

But that doesn’t mean the DNR got what it wanted.

“We don’t always get ripe fish,” Somers said. “We’ll get green ones, but they won’t ripen in the cage. They’ve got to swim around to get ripe. It’s very disappointing when you catch a 35-pounder and she won’t ripen up.

Matt Hughes, who spawns the fish on the river and transports them to Wolf Lake for rearing, said the DNR is getting as many eggs as it needs, but it’s still not collecting as many brood-stock specimens as it would like.

“The total egg goal is 500,000, and we can get that with a handful of good girls,” Hughes said. “So it’s more about the number of pairs we can get in a season. We can take as many as 18 pairs, but we’ve never even come close.”

The eggs are collected over a three-week period and it wouldn’t help to extend brood-stock collection longer.

The DNR continues to raise a smaller number of northern muskies for stocking in western U.P. waters and in a few land-locked inland lakes in southern Michigan, including two brood-stock lakes as something of an insurance policy should problems with the Great Lakes strain ever develop. Northern muskies currently are obtained from Wisconsin in exchange for Great Lakes muskellunge fingerlings.

Great Lakes muskie fingerlings remain in the hatchery until late August or early September, when they are transferred into lined ponds at Wolf Lake that have been stocked with fathead minnows. Ponds are drained beginning in late October and fingerlings are stocked by mid-November.

“Once they get on minnows they grow like weeds in the lined ponds,” Hughes said. “We shoot for a 4 1/2- to 5-inch fish before they’re transferred to the ponds. That’s typically when they are large enough to eat straight-run minnows so we don’t have to buy the more expensive, smaller minnows.”

This year, field staff was joined dockside by researchers from the University of Michigan’s School of Natural Resources, who are studying muskellunge diet. The grad students prop open the fish’s mouth, insert a length of PVC, and then pump water into it, washing the stomach contents into a bucket.

“Last year we collected 86, but only 12 had anything in their stomachs,” said Ellen Spooner, who is working on her master’s degree. “I’m trying to find out if they don’t eat during the spawn – that’s my hypothesis. Most of them have empty stomachs.”

What she’s found are white suckers, catfish, bass and sunfish. She didn’t find any perch or walleyes – so far – which is what the average angler believes the muskies are eating.

The Great Lakes muskie-rearing program is only halfway there production-wise, said Dexter, who praised the Michigan Muskie Alliance for its help maintaining ponds, harvesting fingerlings and providing money for minnows.

Thanks for posting. Its good to see a mention of MMA and the help we have put in trying to make it all happen!
“My father was very sure about certain matters pertaining to the universe. To him all good things-trout as well as eternal salvation-come by grace and grace comes by art and art does not come easy.”
Top

caught a few that have spilled eggs in my boat so they must eat at some point.

And they do enjoy a yummy walleye snack.. at least the NW Ontario ones do..
Top
Post Reply
3 posts • Page 1 of 1